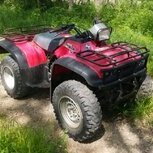 By farmerbrown, May 15 in Custom Builds - Restorations